To Sleep, Perchance To Dream…

I had the most beautiful dream last night.

It’s been with me all day, and I still feel as happy thinking of it as I did while I was dreaming.

It began with me and my brother being together somewhere, and as we left, we were given directions. He turned right, I turned left, and we both thought we were on the road we had been told to take.

So I walked by myself, without being concerned about it, I just followed the road, and I came to a park – I even dreamed the name of the park, it sounded absolutely reasonable, almost familiar, as if it really existed (I can’t remember it now).

While walking through a sort of ‘club area’ with quite a number of people – first I thought there were only men – I met (or just noticed?) a rather sleazy older man, and then his daughter – but I didn’t stay there long.

I walked on into the park instead, and into the most wonderful landscape:

I was on a path high up in the mountains, a stunning view ahead of me – an enormous sky, blue and bright, and a view to the city far below in the valley (which reminded me of my city – it had a river running through it as well). But what was even more beautiful was the place where I was, up on the mountain: near me, there was a river too, running quite steeply downhill – perhaps the same river as the one in the valley, just nearer its source, burbling along clear and fresh and bubbly. There were low fir trees on the mountainside, mossy rocks and grass, like you’d find high in the mountains. It made me so happy to be there, it was just so beautiful. 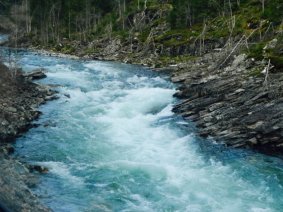 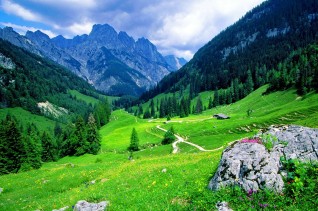 I had not taken the road I had been told to take.

I had not taken the road my brother (i.e. my family) chose.

Not for one second did I feel lost or afraid in that dream.

I had taken a different road, I had arrived in this wonderful place, and I was happy.

This entry was posted in Reflect and tagged beauty, difference, dream, happy, joy. Bookmark the permalink.

1 Response to To Sleep, Perchance To Dream…